KWC is a Taiwanese manufacturer of airsoft and air replicas which has been in operation since the early 1980s. KWC were the first manufacturer to produce blowback replicas. The company produce a range of blowback semi-auto replicas in 6mm and 4.5mm formats and a number of revolver, rifle and SMG replicas. KWC also act as OEM to a number of well-known distributors including Cybergun and Umarex. Recently KWC have introduced replicas of several weapons to their range and the 2014 catalogue includes blowback replicas of the P.08 Luger, Mauser M712 Broomhandle and Makarov pistol.

KWC produce replicas which have very good functional and visual accuracy – their Colt 1911 range for example, are amongst the best replicas of this pistol (KWC also manufacture the Tanfoglio Witness on behalf of Cybergun). They can be decent shooters too, though I have found some variability between examples of the same model – some are very good indeed, some less so. Finish varies, with some models having good and hard wearing finish and some being very prone to wear and scratching. Reliability also seems to be an issue with some owners reporting no problems after extended use and others noting a range of problems. However, KWC replicas tend to be relatively low cost and all have good weight and feel.

Worst things about KWC replicas: Finish isn’t always durable, some variability in power and accuracy between examples, long-term reliability not always the best.

My favourite KWC replica: Is the new P.08 Luger. Full blowback, a working toggle, drop-out magazine, CO2 powered and available in both 4.5 and 6mm versions, this ticks all the Luger boxes. Early reports suggest that this is a pretty good shooter too – this is definitely one I’ll be looking to add to the collection.

Tanaka Works is a Japanese manufacturer of 6mm replica rifles and pistols, though they’re best known for their revolver replicas. Tanaka tend to make replicas in small batches featuring different finishes so that numbers of each model are fairly small. Most Tanaka revolvers feature a milled aluminium frame, ABS outer barrel and brass inner barrel.

All current and recent Tanaka models use the patented Pegaseus system which utilises a fixed gas reservoir within the revolving cylinder. This system allows replicas to be very functionally accurate and grips and other parts intended for real weapons can often be fitted to Tanaka revolvers. Previously, Tanaka used the Cassiopeia system, where individual shells were charged with gas. This gave extreme functional accuracy, but was discontinued when the Japanese Government claimed that these replicas could be too easily converted to fire live rounds. Tanaka replicas using the Cassiopeia system are now rare and sought by collectors.

Despite the use of ABS on outer barrels, Tanaka replicas handle and feel just like real firearms. A range of finishes are used including Midnight Gold, which is an extremely close match for the blued finish on some revolvers. Visually, these are as close as it gets – every pin, screw and contour of the original is perfectly modelled. However, in my experience (I have owned three Tanaka revolvers), they aren’t great shooters. My Tanaka replicas shot at just 250fps, and grouped at around 3-4″ at six yards. Worst of all, they fired with a weedy “phut”, very disappointing for something that looks so real.

So, a Tanaka is a great replica, though you may have to sell a kidney or a child to fund the purchase of one. But you shouldn’t expect an equally great shooting experience. And if you can find a good Cassiopea SAA, buy it immediately and keep it as a legacy for your unsold children – in a few years, it’ll probably be worth more than your pension.

My favourite Tanaka replica: Is any of the range of Colt SAAs.They’re all things of great beauty, but the heavyweight, removable cylinder model in Midnight Gold finish is one of the most impressive replicas I have ever seen or handled. Just don’t expect it to shoot with much authority and be very careful not to scratch the finish.

Tokyo Marui is a Japanese manufacturer of gas, electric and spring powered airsoft rifles, pistols and SMGs. I have always been dubious about TM pistols, mainly because other than for brass inner barrels and metal magazines, they’re made entirely of plastic and feel very light indeed (for example, the TM Smith & Wesson M19, 6″ weighs just 580 grams, compared to 1250 grams for the Umarex S&W 586, 6″). Racking the slide on a Tokyo Marui semi-auto replica gives a toylike “click-clack” sound rather than the satisfying “ker-chunk” that you get on metal slide guns. Finish is also variable – some are very good but some less so, with prominent moulding seams and heavily engraved markings.

Given all that, you’re probably wondering why I’m talking about TM at all in an article about the best replica? Well, here’s the thing – TM pistols are great shooters. They throw BBs a long distance on a very flat trajectory, they’re accurate, consistent and supremely reliable. For these reasons TM pistols are one of the most popular choices for skirmishers, but they also make great target shooting pistols. If your priority is shooting accuracy and reliability rather than finish and heft, a TM may be a good choice. 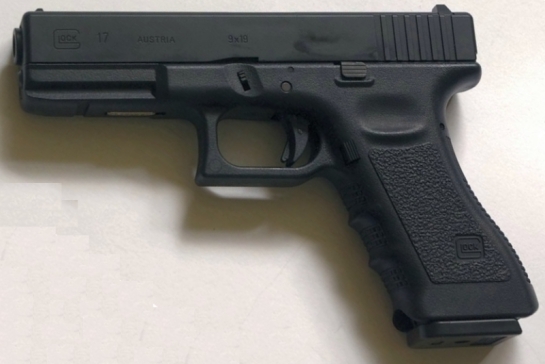 My favourite Tokyo Marui replica: Is the Glock 17. It’s a licensed replica with accurate markings and captures the look of the chunky original very well. At 720 grams, it has a more convincing weight that some other TM replicas and it’s just a great shooter. These can group at 1″ at six yards and will send a BB more than 70ft to reliably hit a person sized target.

Umarex Sportwaffen GmbH & Co is a German manufacturer and distributor of replica pistols, rifles and SMGs. In 1993 Umarex merged with firearm manufacturer Carl Walther Sportwaffen to become part of the PW group of companies (which now also includes Hammerli and Rohm). Umarex own license agreements with Heckler and Koch, Colt, Smith & Wesson and many others. Umarex produced their first replica air pistol (the Walther CP88) in 1996 and now offer a huge range of replicas in .177 pellet and 4.5mm and 6mm BB versions. Some replicas are designed and manufactured in Germany, others come from Taiwanese OEM companies such as KWC.

The Umarex range of pellet shooting replicas include the Walther CP88 and CP99, the Colt 1911 and the Smith & Wesson 586/586. All are characterised by high quality construction and finish and good power and accuracy, but none are especially good functional replicas. Some Umarex 4.5mm revolver replicas are very good indeed (the Smith & Wesson TRR8, for example), as are some of the 4.5mm, blowback semi-auto replicas (the Walther CP99 Compact, for example). In general (and there are notable exceptions), Umarex produce good quality, well finished and designed replicas. Some are also powerful and accurate shooters.

My favourite Umarex replica: Is the Smith & Wesson 586/686 range. I don’t especially care for the nickel finish on the 686, and I wish the whole cylinder revolved, but overall this is a beautifully made and finished replica which shoots extremely well. Best one for me is the 6″, but I don’t think you’d be disappointed with a 4″ or 8″ version.

And if I was forced to choose a best replica, it would be… The Tanaka SAA. No, wait a minute, I really enjoy shooting my Umarex S&W 586. Hold on though, the chunky, blowback ASG CZ75D is pretty good. And the Cybergun Mini Uzi is just so much fun… Nah, it’s no good. I can’t choose just one.   The answer is that there probably isn’t a single best replica pistol. What’s best for you depends on what you’re looking for – do you want an accurate and powerful shooter, a good visual and functional replica or something that offers a compromise between the two? What we really want of course, is a replica that has the finish and functional accuracy of a Tanaka, the power and accuracy of an Umarex and the cost of a Cybergun. I’d buy one of those. But until then, the best replica pistol will be the one that ticks most boxes for you.

3 thoughts on “Which is the best replica pistol? Part 2”